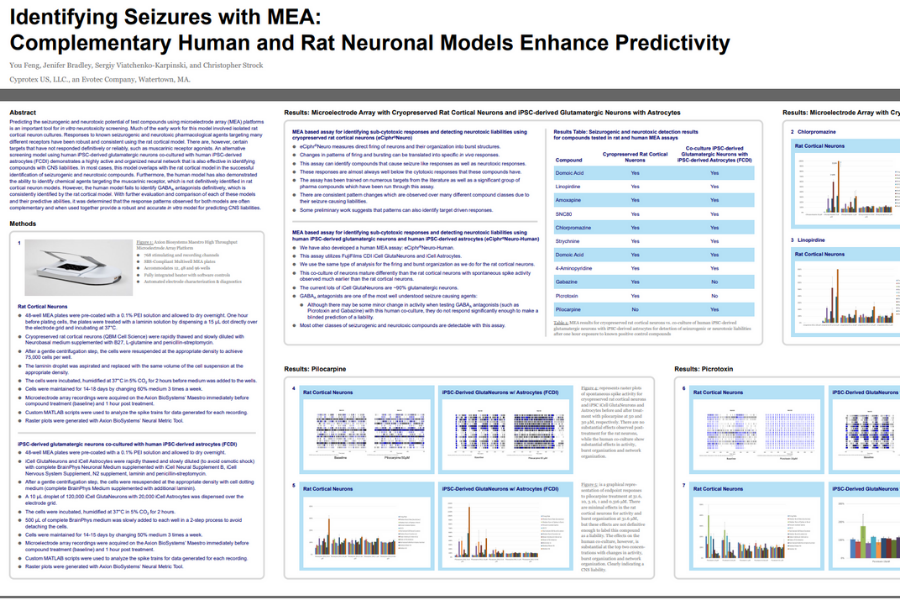 Predicting the seizurogenic and neurotoxic potential of test compounds using microelectrode array (MEA) platforms is an important tool for in vitro neurotoxicity screening. Much of the early work for this model involved isolated rat cortical neuron cultures. Responses to known seizurogenic and neurotoxic pharmacological agents targeting many different receptors have been robust and consistent using the rat cortical model. There are, however, certain targets that have not responded definitively or reliably, such as muscarinic receptor agonists. An alternative screening model using human iPSC-derived glutamatergic neurons co-cultured with human iPSC-derived astrocytes (FCDI) demonstrates a highly active and organized neural network that is also effective in identifying compounds with CNS liabilities. In most cases, this model overlaps with the rat cortical model in the successful identification of seizurogenic and neurotoxic compounds. Furthermore, the human model has also demonstrated the ability to identify chemical agents targeting the muscarinic receptor, which is not definitively identified in rat cortical neuron models. However, the human model fails to identify GABAA antagonists definitively, which is consistently identified by the rat cortical model. With further evaluation and comparison of each of these models and their predictive abilities, it was determined that the response patterns observed for both models are often complementary and when used together provide a robust and accurate in vitro model for predicting CNS liabilities.