About 1% of children in the US have been diagnosed with a severe form of autism spectrum disorder (ASD) so debilitating that many parents are desperate for treatment. Some parents have found an effective treatment in an unlikely source:cannabis.

But at the same time, a recent study revealed that consuming cannabis during pregnancy might be associated with an increased risk of ASD in children. How is it possible that cannabis may contribute to both the cause of ASD and the treatment of its most severe forms?

Well, through the delicate study of cortical organoid models of brain development using a bioelectronic assay, researchers have learned that the primary culprit in this scenario is the brain’s endocannabinoid system (ECS).

For years, scientists have known that the ECS forms early in development and helps the fetal brain mature. This neural network regulates a constellation of processes in the brain, from neuron-to-neuron communication to plasticity (the way the brain learns and adapts over time).

As medicinal and recreational cannabis continues to gain legal and social support, including among parents of children with ASD, it is critically important that scientists study how consuming cannabis impacts the developing brain, from fetal stages to adulthood. Additionally, as more parents treat their children with ASD, other researchers need to understand how the ECS interacts with ASD at the neurobiological level.

As mentioned previously, scientists have found a correlation between consuming cannabis during pregnancy and the development of ASD in children. They have also found that cannabis exposure during adolescence can induce ASD-like symptoms in animal models of severe ASD.

Interestingly, scientists have found that ASD symptoms are closely associated with hyperactivity in the brain, possibly related to dysfunction of the ECS. For instance, people with severe ASD are often hypersensitive to stimulation. They are also more likely to have a concurrent seizure disorder. Scientists have seen this hyperactivity at the molecular level: in animal models that represent more severe forms of ASD, their brains exhibit reduced levels of inhibitory neurotransmission, the process that regulates brain network activity. Also, in a small, post-mortem study of people with ASD, researchers found that ASD brains housed 35% fewer inhibitory neurons in a brain region responsible for higher-order function. These anatomical differences are likely more prevalent in more severe cases of ASD, but more investigation is needed to confirm the extent of these effects across the ASD spectrum.

Scientists have discovered that ECS activity directly regulates neural activity and likely mediates cannabis’ actions in the brain. In mice, shutting down the ECS leads to seizures.

Interestingly, another component of cannabis, cannabidiol (CBD), is a Food and Drug Administration-approved substance to treat two severe forms of epilepsy. Mirroring anecdotal reports, scientists are now studying whether one of these CBD-based drugs can effectively treat people with severe ASD.

When combined with clinical data and anecdotal reports, research suggests that the ECS plays a central role in brain development and, when it is not functioning correctly, ASD-associated neural deficits.

How is the ECS regulated?

The ECS activates when certain molecules bind to specific receptors. The CB1 receptor is most abundant in the ECS and is distinctly sensitive to stimulation from endocannabinoids and THC. The ECS’ role in neurodevelopment, ASD, and seizure disorders points to the CB1 receptor as a critical target in treating many neurodevelopmental conditions. While animal models make it simple to study how manipulating CB1 impacts health and behavior, scientists need a different approach to study these receptors’ roles in ECS activity and plasticity. Specifically, scientists need to examine brain cells in a dish, where scientists can directly manipulate and observe them. Scientists have found that one of the best ways to do this is to build cortical spheroids and monitor their activity over time using a bioelectronic assay.

A cortical spheroid (or organoid) is a three-dimensional model composed of neurons and supporting cells used to study the brain. Scientists can generate cortical spheroids using induced pluripotent stem cells (iPSCs) they have transformed into nervous system cells. These iPSC-derived models express the same genetics as the person the cells came from, allowing scientists to model human neurological conditions such as ASD in a dish.

Our team at the Brody School of Medicine at East Carolina University created spheroids in our lab using cells from people with ASD and neurotypical controls. The models contained functional synapses (the sites where neurons exchange information) and the astrocytes that help synapses form and stay healthy. These connections were very adaptable, mirroring the plasticity of a real brain. Finally, like in their native habitat, the neurons activated spontaneously, creating layered structures that closely resembled parts of the fetal brain at about 19-24 weeks after conception. We used these spheroids to study how the CB1 receptor modulates activity in the developing brain through the ECS using a bioelectronic assay, which allowed us to capture ECS activity in real-time.

A bioelectronic assay records electrical activity collected in a multi-well plate that contains multielectrode arrays (MEA) at the bottom of each well. As cells from the spheroids grow over the MEAs,the MEAs collect information about neuronal activity over time and space. In our study, we noninvasively measured electrical potentials, a proxy for action potentials (the primary electrical signal of neurons). 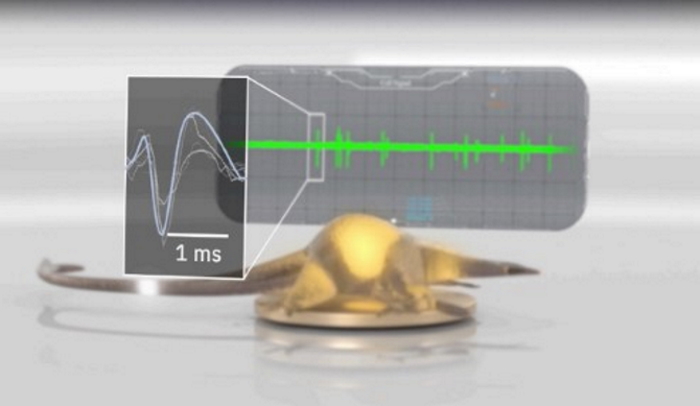 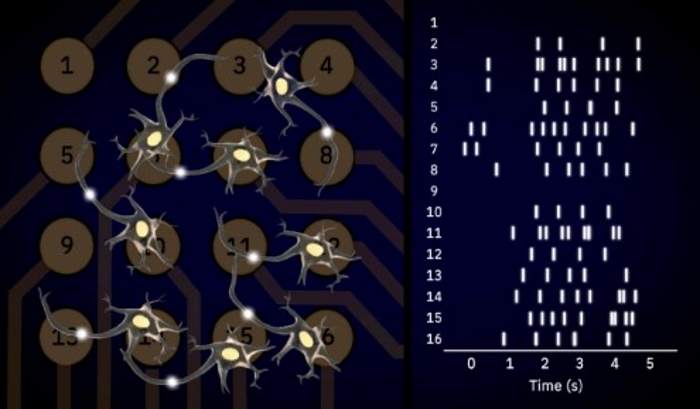 Figure. 1: (Left) A graphical representation of a neuron growing over an MEA electrode. The platform records voltage activity from the neuron (green) and automatically tracks individual neural signals, or action potentials (white). In an MEA culture well, neurons form a network over the electrodes. The software records the location and time of every action potential with a tick mark.

We treated the spheroids with a chemical that blocks CB1 receptors from receiving input and then we monitored changes in electrical activity over 24 hours. These receptors are found on multiple types of synapses, so we knew that blocking them would have multifaceted effects. We found that shutting down the ECS did not affect net activity in the spheroids, but it increased the variability in their activity. This result suggested that the ECS helps guide the formation of neural circuits to streamline communication between neurons.

The bioelectronic assay made it easy to monitor our 3D cortical spheroids in vitro. Without it, we would have found it difficult to detect the subtle changes in neural activity we observed over the neuron population over time. Because the assay uses a multi-well plate, we could simultaneously examine the impact of multiple doses of the CB1 blocker to capture a more complete picture of how the ECS contributes to neurodevelopment. We watched neural circuits form in a fetal brain model, free from interference except for that we introduced.

The future of cannabinoids in ASD

Our objective here was not to find a treatment for ASD but to begin unraveling the complex role of ECS activation in brain development and offer a glimpse into a potential treatment target for ASD in the CB1 receptor. There is still much to uncover about cannabinoids as a cause and a treatment for ASD. For sure, this is an active area of research that will generate rich insight into the interconnection between ECS and ASD. One day, this work could lead to a more complete understanding of its pathogenesis and the discovery of effective cannabis-derived treatments for the condition.